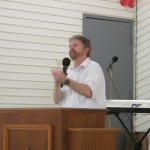 There is a great need in Honduras for understanding of the importance of true repentance as an inseparable part of salvation.  On my first opportunity to preach I felt lead to preach out of Genesis 4 the contrast of a life with and without repentance using the example of Cain and Abel.   Both brought an offering, which indicates a type of duty that could only be related to the testimony of three things; 1) the testimony of Adam and Eve of the glory that once was theirs and then was lost; 2) the prophecy of the redeemer in Genesis 3:15; 3) the substitution, or efficacy, in the covering of skins and the blood that had to have been shed to obtain the skins.  Abel obviously repented of his sins and by faith believed God, and that is why he brought the blood sacrifice.  Consider how much a step of faith it was for Abel by the fact that the instruction for the usage of animals for food only came after the flood.  Neither Abel’s nor Cain’s offering were random selections for something to bring.  It was simply that Abel’s offering followed the pattern of instruction from God, but that Cain’s followed the pattern of the serpent –  unrepentant disobedience.  Cain deliberately did it his way.  Cain’s fallen countenance means that his soul was literally in torment by the study of the word.  But even though God was speaking to Cain and encouraging and warning him in Genesis 4:6-7, Cain shows his hardness of heart and denial of his own sin by lashing out at Abel.  Is it not amazing that Cain could be that way and even kill his own brother?  So what we see in Cain is a life without repentance that suffers three things: The unrepentent heart, 1) will not respond to discipline (Gen. 4:6-7); 2) will not be saved (Gen. 4:11-14,16); 3) will not pass on anything but a curse to his children as seen in Lamech (Gen. 4:15,23-24).

I heard a story from a pastor about how he had observed how some Hondurans may make a profession of faith in the Lord Jesus and perhaps wait as much as six months to be baptized.  During the time before their baptism they sometimes indulge themselves in sin before the baptism with the attitude that they will have to be serious about their walk after the baptism.  My friends, that is not true repentance.  That man or woman is not saved from the fire of hell.  True repentance is a complete disgust of sin.  No more lusts.  No more fornication or even a hint thereof.  Take to heart what 1 Corinthians 6:9-11 says.  – Preaching the truth in love.