“He that hath pity upon the poor lendeth unto the LORD; and that which he hath given will he pay him again.” PROV. 19:17

There are many in La Ceiba that beg, of which some are questionable.   There are many here, just like in the States, that are given over to demon spirits of alcohol and drugs.  Then there are the truly needy. 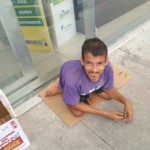 I would like to introduce you to Isaac.  When I first met Isaac, over a decade ago, he was scooting around on little cart pushing himself with only his hands.  He hung out most of time in front of the same grocery store.  I didn’t think he had any legs because of the way he had tucked them away.  I realized after seeing him on different occassions he actually does have legs, but he is paralized in some way from the waist down.  One thing about Isaac, he is always cheerful.

Consider the story in the Gospel of Luke found in chapter 16:19-31 about the rich man and Lazarus.  The rich man had his reward in this life and died and went to hell.  But the beggar, Lazarus, who was laid outside the rich man’s gate, died and was carried by angels to Abraham’s bosom.  Had the rich man had a heart for God and concern for poor, it would have been easy for him to minister to Lazarus because he was right outside the door.  Can’t you just imagine the line that the rich man refused to cross to reach out to Lazarus?  When we bring this thought around to a little self-examination, we should not neglect our oportunity to minister to the poor and truly needy.   Nor should we be dishonest in thinking that we might not be on the same side of the imaginary line as the rich man.  Have you truly surrendered everything to Jesus?  Isaac always makes me think about this question.  He will make you think about it too.