Honduras has more of the special recognition days than you could ever imagine.  This month they recognize Day of the Americas, Earth Day, Spanish Language Day, and Day of the Family.  For the Day of the Americas celebration, the students at the school we work with had a special event at the central park area.   Each grade was responsible for a booth that featured information and food from one of the countries in the continental regions of the Americas.  Nine countries were represented.   The reason why the school put this event on is not necessarily to enrich the knowledge of the students, but rather because the Department of Education actually requires schools to do things like this or the school will be fined.  (I should write a separate post about that.)  Because this event was designed to have interaction with the public, I expected to have some evangelistic opportunities.  I was not disappointed.  A North American always attracts people, so I came with the Spirit for ministry.  Here are some photos from the event I want to share before I get into the story of what happened next with the ministry to a crack addict. 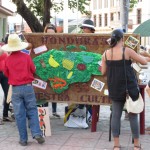 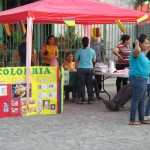 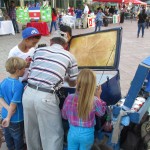 I spotted a man sitting on the edge of the park behind the students’ booths and he was obviously high on something.  He was acting very foolish.  I have to say I was not at all surprised when he saw me and got up to come over and speak to me.  May I say that I was ready to see what Jesus would do for this man whom I will call William.  This is where it gets a little funny.

William came close enough for me to see that his eyes were dialated.  This meant that he was under the influence of crack and that he was demonized.   Let me interject that this ministry was actually conducted in English for the most part, because William was bilingual.  As he began to ask me questions, I responded as the Spirit led with questions back to him about his life as relating to things like sin, judgment in hell, and the salvation of Jesus.  When I proclaimed to William the truth, that he was in bondage to sin and demons and that the Lord Jesus was calling him to repent,  the power of the Lord was present.  He confessed his sin and his addiction and expressed his desire to trust Jesus to deliver him.  He also gave consent for me to pray for him to be delivered from demons.  I don’t think it was a coincidence that he put on his blue t-shirt as soon as we finished praying.  That was an evidence that he was changed a little.  Although William may have been clothed, he was still a little ways from being fully in his right mind.  My wife and I were very encouraged by this little ministry event.   These are some pictures she took. (Consider Luke 4:18)  Please continue to pray for us for the protection and anointing of the Lord Jesus to preach his gospel. 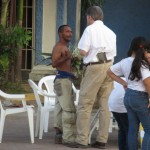 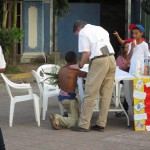