The LORD has opened a door for a new location of ministry even during these wicked times. Here is a photo of one of our recent services using costumes during the preaching. In today’s ministry it is so important be on task and in touch with the Spirit of Truth. There are things that we need to avoid and hide ourselves from, such as everything that God hates, or labels as sin, or calls abominable. In Revelation 9:21 and 18:23 we see the sin of “sorceries”. The root word in Greek is the word for pharmacy. The weapon to avoid and hide from is in the needle. We’re calling people to Jesus and warning them to hide themselves from this present evil age. Many are still going on and suffering for it. Proverbs 22:3 “A prudent man forseeth the evil, and hideth himself: but the simple pass on, and are punished.”

The previous post on March 15 was posted on the day that the government of Honduras suspended constitutional rights and put everyone in lockdown as they followed the mantra and misguidings of the WHO. Next week on June 8 the government is begining to allow limited re-opening of the economy. Was all this warranted and do the measures accomplish any good? The answer is no. If you have the Holy Spirit and reasoning skills you can see this. Everyone without exception has to deal with this change and, as I referred to Job going through a trial in the 3/15/2020 post, we too should understand what is taking place from the light of Scripture. Judgement of the world is on the immediate horizon prior to the return of Christ. Spiritual forces of wickedness are at work in the high places in the air and on the earth. God wants us to be armoured up (Eph.6:10-18) and engaged in the spiritual battle (2Cor.10:3-6) so that we can win souls up to the end and clear the way for Jesus Christ, the righteous judge, to deal with the devil and the children of disobedience. In our ministry we have a clear goal from the Lord. Our prayer is for the resources to accomplish his work.

Job had a right perspective in looking for the LORD to do something in him (Job) when he reached the other side of the trial. Job said in verse 10, “But he knoweth the way that I take: when he hath tried me, I shall come forth as gold.” The good result would come because of Job’s faithfulness to God’s word. Good would not result from simply passing through the problems. Job was looking to the LORD constantly before, during, and after the trials. Job’s expectation to come forth as gold is raised to a higher value by the Apostle Peter in 1Peter 1:7 saying, “That the trial of your faith, being much more precious than of gold that perisheth, though it be tried with fire, might be found unto praise and honour and glory at the appearing of Jesus Christ.” In Job’s case, we can see what was going on behind the scenes that he could not. It is written for our benefit. We’re holding to God’s word and looking for the appearing of Jesus Christ while enduring our trials for the perfecting of our faith. I have seen the LORD’s hand directing us to go to prayer over some things and now the LORD has answered and brought us to a new location to continue the ministry of church planting. It has been tough and full of trials, but we are looking for Jesus. Honor and glory to the Lord Jesus. May we see many souls saved.

The calling of the missionary is to do the ministry of reconciliation, which is first walking in the life of faith and second proclaiming the message to every one to receive new life by faith [in Jesus Christ]. If anyone has the idea that this is a simple task they are mistaken. As a born again follower and minister of Jesus Christ I face tremendous opposition to which I fight through the “Spirit” of God (Gal.5:16). We want our Honduran brothers and sisters to be established in the true faith. Galatians 5:1 says to “stand fast in the liberty wherewith Christ hath made us free.” No mistaking that this chapter calls out the very activities which everyone is in some degree involved in while living apart from Jesus Christ: known here as being in the “flesh” (Gal.5:19-21). Friends we MUST see things from God’s perspective. You’ve heard the saying, “You must learn to walk before you can run.” The Christian life is realistically the opposite. When conviction of sin before a Holy God comes, FRIENDS, RUN FROM SIN! RUN TO JESUS! OBEY THE SPIRIT! Let nothing get in your way! Before you can “stand fast” you need to run to Jesus. The apostle Paul wrote to the Galatians in chapter 5, verse 7, “ye did run well”, which shows us there is some running going on. After the running there is the walking (Gal.5:16,25). I think it could be said that when you’re walking in the Spirit, you’re also standing fast in the liberty of Christ. Unfortunately I encounter many people who say they are Christians, but they practice without hesitation the “works of the flesh”. It ought not be so.

The title of this post comes from 1 Timothy 3:15. I am so glad that the Bible is so clear about how the believers are to conduct themselves. As a missionary I pray for the Holy Spirit to bring conviction and godly sorrow to people when the gospel is preached. We long to see the fruit of righteousness being brought forth in people. Many don’t want to listen and turn to the Lord Jesus. Many don’t want to leave their sin behind. You know that after preaching to large crowd the truth about “repentance from dead works, and faith toward God” (Hebrews 6:1), only a few may come back the next week. Oh but how sweet the fellowship will be in that smaller group.

Without a doubt 1st Corinithians 15 is a very powerful chapter of the Bible, and describes exactly what we do here in Honduras as missionaries, and me as a preacher.  Every day we preach the gospel that we ourselves have received (1Cor.15:1-3).  We don’t do it in our own power, but in the power and grace that God has given through Jesus (1Cor.15:10).  Every day we have a new commitment to preach Jesus, because he is worthy.  Luke 9:23, “If any man will come after me, let him deny himself, and take up his cross daily, and follow me.”

When a Honduran couple wants to get married it’s going to be costly.  The only recognized marriage is through the government.  In Honduras, the couple has to go to the local municipality office with birth certificates from their place of birth.  Some have to travel by bus a couple of days to obtain the birth certificate.  Once they have their documents and go to the local municipality the couple will come away legally married regardless of whether the couple has a church wedding or not.  This is the only recognized wedding ceremony.  It will cost the couple $335.00.  That might not sound like a lot of money, but let me put this into perspective.  The Honduran mimumum wage is about $2.00/Hour.  That means the cost equates to an entire month’s salary.  Remember, if they have to travel somewhere to get their birth certificate, the cost goes way up.  To make matters worse, most workers don’t even earn the full minimum wage.  As I thought about this and considered what to think about it, I realized that the Bible verses in Romans 13:1-2 is applicable  saying, “Let every soul be subject unto the higher powers. For there is no power but of God: the powers that be are ordained of God.”  My perspective is that marriage for the underemployed is achievable, but requires a lot of resources.

The Honduran government has finished processing our request for formation of ministry.  We praise the Lord for it.  Alcanza Honduras Para Cristo exists for the advancement of the gospel of Jesus Christ and the planting of churches.

Service is not how you become a Christian.  Service, however, is a part of the life of a Christian.  In Matthew 25:31-46 we learn there will be a judgement with eternal consequences related to how well we’ve served others.  Matthew 25:33 speaks of a separation of the sheep from the goats.  The group that represents the sheep have done some things for the needy, but the group identified as the goats have not.   Jesus says in verse 40 that ministry to the poor is as unto Jesus himself.   To neglect this ministry is serious and results in eternal damnation.  My life is dedicated to serving the Lord Jesus through ministry to the impoverished country of Honduras.  We not only want to share the Gospel that sets the captive free, but we also want to want to minister to the basic needs of folks.  Either way, we want to urge Christians to see their service as if they are serving the living Lord Jesus.  Think about that long and hard. 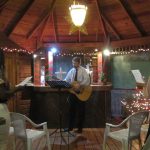 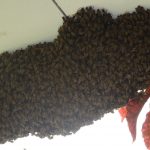 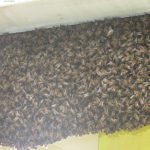 Living in Honduras is an adventure.  We do not set out for it to be, but it just happens.  On Sunday, November 26, we had a swarm of bees show up early before Sunday School.  The bees were busy trying to serve their queen while I was busy serving Jesus, the King of Kings.  These bees were located close to where we minister to the children, but I felt it was okay to go ahead and have Sunday School.  The children were not in danger at all, but they sure were nervous walking past the colony.  After we had a great Sunday School and the kids left, I sent out a call for help to see if any of my Honduran friends knew who could remove bees without killing them.  Every option I was given turned out to be a dead end.  On the third day, we just prayed to God in a strong prayer that He would remove the bees and that we would not have to kill them.  We left our home for a night and when we came back the next day the bees were gone.  Friends that is just how God works and answers prayer. 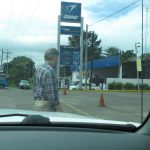 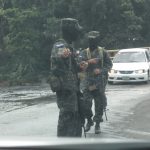 Also on this same Sunday Honduras had its presidential elections.  Honduras has a lot of distrust of its government and this really came out when the opposition party saw its candidate’s lead go away and the incumbent finish with a lead of less than two percent.  Claims of a stolen election caused riots to breakout going into the weekend and the country is now in a big mess.  I have been talking with other missionaries in other cities to stay on top of the problem.  Chaos like this is what you would here about in the news of some other country, but we’re right in the middle of it.  Right now there is a nightly curfew.  There is not any gasoline and food is running out.  Everyone is affected because the supply lines are shut down.  In the midst of this, we are continuing to minister the Word of God to the people.  God is working in it.  We are going to treat this just like the colony of bees and pray that God will resolve and remove this crisis.  (Above is a picture of a roped off gas station and some soldiers keeping the peace by a bridge that was once blocked by protestors and fiery baracades. )  Would you join us in prayer and send us a email at <info@reachhonduras.com> to let us know you’re praying for us?  Blessings in Christ.