Acts 20:35 gives us a quote from the Lord Jesus saying, “It is more blessed to give than to receive.”

Giving back to God should be the most natural thing for us and never with the intent to get something in return.  On the other hand, God has promised to take care of our needs as we honor him (Proverbs 3:9-10).   See the circular relationship?  You have to Love the Lord.  We just received one of those surprise financial gifts.  Thank you Jesus.

“For our light affliction, which is but for a moment, worketh for us a far more exceeding and eternal weight of glory.” (2 Corinthians 4:17)  Daily we endure the challenging work of missionary deputation.  We pray and reach out to new churches while all the while our thoughts are toward the mission field down in Honduras.   Every day that my family and I are not waking up in the country of Honduras is to me a kind of affliction.  In my mind I see the faces of the Honduran men, women and children that need to hear the gospel.  Every time I use my Spanish for a witness about Jesus my passion and Love for the Lord and His mission field supersedes all else.  Lord help us to get to Honduras for your glory, amen.

How awesome it is to write about great successes, souls being saved, baptisms and the church increasing in blessings.  While it’s tremendous to write these reports, it’s not the whole story if you omit reporting afflictions.   Successes are far greater in light of afflictions of the faith. “But call to remembrance the former days, in which, after ye were illuminated, ye endured a great fight of afflictions.” (HEB. 10:32)   Afflictions follow “illumination” and they can have two results.  They will either make you or break you as seen in Mark 4:17.  What I want to emphasize is how much greater the successes are while enduring affliction for faith in Christ Jesus.  Be encouraged with us if you are afflicted for your faith in the Lord.  I believe that is the thing I am experiencing now.

On January 13th, my interview  with KHCB Radio will be aired at 7:45 AM and repeated at 1:15 PM.   I will be sharing my salvation testimony and about the missions call.  I pray that God will use this since it will be broadcast on all the satellite stations around the country.  The station number in Houston to dial in to listen is 105.7 and the web address is www.khcb.org.  This was a true blessing and I thank the Lord for it.

Eph. 3:14-19 “For this cause I bow my knees unto the Father of our Lord Jesus Christ, of whom the whole family in heaven and earth is named, that he would grant you, according to the riches of his glory, to be strengthened with might by his Spirit in the inner man; that Christ may dwell in your hearts by faith; that ye, being rooted and grounded in love, may be able to comprehend with all saints what is the breath, and length, and depth, and height; and to know the love of Christ, which passeth knowledge, that ye might be filled with all the fullness of God.”

The Lord blessed me with an opportunity to be interviewed by Dolly Martin at Houston’s KHCB Radio Spanish affiliate, Radio Amistad 1400.AM.   The broadcast times are 8:45 AM and 4:30 PM on January 6th and 8th.   I give my testimony of how I came to know the Lord Jesus as savior and then share about the ministry my wife and I will be doing in Honduras.   If you want to listen via the internet, go to www.radioamistad.net/ra/escuchenos-en-vivo/.   I pray that the Lord will use it.  Of course it will be in Spanish. 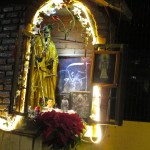 Left to Right: Idolatrous shrine to the dead; Two volcanoes by Mex.City.

“The harvest truly is great, but the labourers are few: pray ye therefore the Lord of the harvest, that he would send forth labourers into the harvest.” Luke 10:2 (KJV)

As soon as the missionary picked me up at the airport in Mexico City I began to learn about the mission field in the worlds 3rd largest city.   The first challenge the brother introduced me to was the traffic.  Everyone has to deal with it and it’s humbling.  The second challenge to deal with in his day-to-day living is water.  Many people in Mexico City have to hand carry water into their homes for general usage.  After the brother learned about my Spanish language skills and Third-world driving experience, he let me take over for him, with the help of one of his church members, to drive his van to make trips to fetch water for his home and get us supplied for the week.  I was feeling the 9,000 ft elevation, but what a joy it was to serve and free the brother up to prepare for the night’s service.  Myself and the evangelist were the guest of the brother for evangelistic outreach.  My role was to be a translator for the evangelist and a general servant in whatever needed to be done to make the week a success and see souls saved.  During our preaching meetings on Friday through Sunday, we saw at least 19 saved and 3 baptized.

In my observation, I have not seen a place with such a great need for gospel ministers as Mexico City.  Even my mission field of Honduras has a higher percentage of indigenous ministers of the gospel than this great city.  There is so much idolatry and religious activity here, yet people will listen to the gospel, praise the Lord.

The brother missionary has been in Mexico City for nine years.  He has a church named Iglesia Bautista Monte Calvario and a radio ministry.  The brother has a great ministry and it was an honor to get to know him and serve with him.

Psalm 16:6 “The lines are fallen unto me in pleasant places; yea, I have a goodly heritage.”

The call of God leads the repentant, born again believer to the most incredible places.  Sometimes I have been asked, “How do you know the “call” of God.  You know it by walking in the Spirit and spending time in God’s written Word so that you will hear the spoken Word.  The spoken word is the instruction to the individual that comes directly from God to the believer.  This is how God led me to be a missionary in Honduras.  Very exciting.  God caused my boundary lines to fall in a pleasant place.  Likewise, I have had a strong desire to go to Mexico City and evangelize and praise God it’s happening in just a couple of days.  This is again my boundary line falling in a pleasant place for ministry.  Life with Jesus is exciting, not because you may get to travel to another country, but rather that you get to help change the travel itinerary of lost souls destined to hell to book their trip to heaven through faith in Jesus.  I sense this trip to Mexico City will be a productive one.  Just today I witnessed to two catholic men, one right after the other.  The first man was actually from Mexico City.   The second man was from Vietnam.   As I shared the gospel with these men, I could not help but be in awe of the wonderful gospel message and the hope that this witness could be the one that the Holy Spirit may use to bring either of these men to salvation.  Where have your lines fallen?  Do you have the goodly heritage?  I pray so.

We give thanks to the Lord Jesus for the blessing to be with an Independent Baptist in Katy, Texas, for their missions conference this week.  This brings us one more step closer to our departure from the US soil towards the mission field.  Whereas November was truly a month to give thanks unto the Lord, December is shaping up to be a bountiful month with an opportunity to travel to Mexico City with an evangelist.  I have had a desire to evangelize in Mexico City and visit missionaries there for several years now, and it looks like that will happen for me this month.  I can do all things through Christ who strengthens me.

Arkansas is really beautiful this time of year with the fall colors in full swing.  It was a perfect time to travel and make a connection with a couple of churches in the Northwest part of the state.  A Baptist Church in Springdale and another in Rogers gave us such a wonderful reception.   We praise God for them.

Also, we want to give God praise for the invitation from a Baptist Church in Katy, Texas, today to be included in their missions conference in December.  What a blessing this is as we walk by faith.

1 John 4:19 “We love him [God] because he first loved us.”  Since God has already taken the initiative and shown his love for us by sending his son to die for us, we have only one reasonable response and that is to  repent, call on the Lord Jesus for forgiveness and surrender all to him.   The song says, “All to Jesus I surrender, All to him I freely give, I will ever love and trust him, In his presence daily live.”  Surrendering is a daily task and not just a one time event.  We recently came face to face with something that we needed to surrender to the Lord.  This “certain” thing just did not seem to be working out in God’s plan for us at this time, so we came to the reality that we had to “surrender all” of this thing to the Lord.  Upon doing so, our hearts began to be overwhelmed with a sense of relief and peace.  It was at this point that we began to pray toward the things that remained, especially regarding the missions call.  Immediately God began to bless that very same day with referrals to churches for presenting ministry.   God is so good.  His love endures forever.